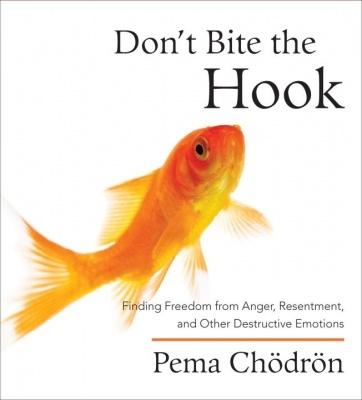 Fear, anger, and hatred, while negative emotions, exist in order to teach us something. When we become aware of our various emotions, we learn why we feel the way we do. When we learn why we feel the way we do, our emotions become productive, rather than destructive forces. Anger usually appears when we fail to set healthy boundaries. If we don’t recognize what our anger is trying to tell us (the wisdom of our anger), it soon descends into violence, hatred, fear, and destruction. In the lecture “Don’t Bite The Hook,” Tibetan-American Buddhist Pema Chodron teaches us how we can transform anger into compassion and love.

Here is an excerpt from Pema Chodron’s recording “Don’t Bite the Hook.”

What is the significance of the teaching on how to work with anger? It has tremendous significance because again and again, whenever we’re challenged with anger, we have the opportunity to open to the difficulty and let the difficulty make us more compassionate, more wise. Or the opposite, which is that when things are difficult, the chances instead of it making us more afraid, and therefore more vulnerable or more subject to being able to catch the anxiety in the atmosphere and spin off into wanting to protect ourselves and our loved ones, and the tendency for aggression to escalate, and violence to escalate under challenge is much greater. I wanted to begin by giving the Dharma talks on the sixth chapter of Shanti Deva — chapter on working with anger. So, for Shanti Deva teaching as he did in the eighth century in India a long, long time ago, to Yolanda University in India to a entire packed audience of celibate monks, you might wonder what the relevance of such a teaching would be today, and all I can say is at the level of human neurosis, nothing has changed much. And so what he has to say and the way he… you’ll see, it actually has humor in it where he keeps pointing out example after example of our foibles of how we justify our anger and all the many, many situations that make us angry. But it’s more than just like losing our temper or something. We’re talking now about finding ourselves in a situation where many, many people are feeling more vulnerable and the situation is more volatile.

And so, it might be that in the years to come, you might look back and think of it as something like, that was teaching. That was really — because I have started to use it every day of my life in difficult situations — has made it possible for me to be become more compassionate, to become more tenderhearted and loving rather than more afraid and full of aggression and wanting to strike out and protect me and mine. You might just look back and say, “This was really important” because right now the key thing is whether it was a difficult situation in the world or not; it’s to use the difficult situations of everyday life to wake us up, to awaken our compassion. To make us feel our kinship with each other rather than to buy into polarization. So Shanti Deva says a lot about our mindset. The mindset of friend and foe. Like and dislike. For me and against me. And how that very mechanism of buying so tightly into this notion of the good people and the bad people — the ones that I like and the ones I don’t like and how we get so invested in this and how this is  “the kindling” or “the fuel” for anger and aggression to escalate. So from this point of view, the teachings are on non-violence and on non-aggression. And you could think of that as a synonym for the word patience.

Pema Chodron is a well known spiritual leader who cares deeply about bringing Tibetan Buddhist wisdom, practices, ideas, and teachings to the Western world. She studied under Chongyam Trungpa Rinpoche, and received Buddhist monastic ordination in 1981.

Click here to check out the Shambhala Audio Complete Collection, for more recordings of the world’s leading spiritual teachers.

Click here to listen to the full version of Pema Chodron’s “Don’t Bite the Hook.“

The post Pema Chodron on Overcoming Anger appeared first on .