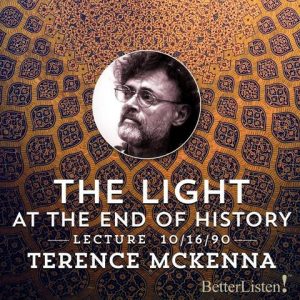 We are excited to bring you the second preview excerpt from The Light at the End of History from Terence McKenna.  McKenna envisions an end to the current age, which has consisted of eons of boredom. He goes on to discuss the growing wonder of the universe as presented by leading astronomers Stephen Hawking and Carl Sagan. Our individual preparation must start with the re-exploration of the visionary insights from non-western people who use psychedelics within a transformational context.

“Our physics has to lead us to believe that thermal nuclear chain reactions in either continuum will leak hard radiation across the temporal barrier. And they said we have to…the implications of this are so disturbing that we have to carry out an experiment to see if it’s true. So in our year, 1906, in world two, an experiment was carried out and a thermonuclear detonation was allowed to take place. And then the dreams of psychotics in world one were studied for months to see if there was any record of a catastrophe taking place. And when the dreams of people in the Siberian region were studied, they picked up evidence of the Tunguska explosion, which as you probably know was this mysterious explosion that took place in 1906. It was either a mini black hole collided with the earth or a piece of antimatter, it’s a very unusual event, more than a simple asteroidal impact.”

The post The Light at the End of History Preview II with Terence McKenna appeared first on .