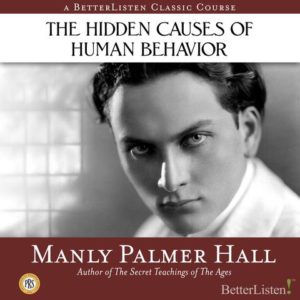 We are pleased to bring you a new collection to BetterListen.com in the form of our first excerpt from Manly Palmer Hall.  The Hidden Causes of Human Behavior is profound and illuminating. You get to experience philosophy, mysticism, and astrology all rolled into one.  We hope you enjoy it…

“Our subject this morning deals with the hidden factors behind human behavior, which can spread, and are spreading, and are even spreading among so-called democratic peoples, to the ultimate hazard of our way of life.

This situation is sufficiently real and serious for us to give it a great deal of thought. A large part of the world’s problem today, unfortunately, originated with us as we went quietly along our way, doing the things which seemed to be opportunistic at the moment. We forgot the tremendous psychological influence that America had upon the entire civilization of mankind. We have overlooked our responsibilities as enlightened examples of a way of life.  As a result of this, we have created around us groups of persons who envied what we had and were determined to acquire, in their turn, these privileges and advantages. With this envy, there was naturally a more careful consideration of our methods, and this consideration has led to a great deal of the trouble that now broods in the world.

The tendency of the last generation has been the tremendous exploitation of the concept of economic progress. We have measured everything in terms of the physical status of the individual. We have sacrificed a great deal here to advance our economic development, and one of the principal things that we have sacrificed, and are sacrificing, is our ethics. And as our ethics go down, our ambitions and our selfishness correspondingly increase.

Until today, in a small way, in a mild way, we are more or less moving into this block or pattern of peoples determined to advance physically, regardless of the cost in every other department of life. This determination, probably with us, has no single focal point. It is not the result of a definite indoctrination on the part of leadership, it is simply man’s own natural selfishness gaining greater and greater control of his conduct.

The individual has gradually weakened those parts of his character by which he was able to direct his efforts with a certain measure of cultural integrity. The loss of this integrity, in this nation particularly, bodes very ill for the future. It warns us definitely, that consciously or unconsciously, we are aligning ourselves with forces in society which we do not admire, and whose actions we regard as reprehensible.

So let us think for a moment of the policy which has been used in practically all of the totalitarian states of the world to accomplish what might be considered a general change and human character.”
Read more about the author and his work here

The post The Hidden Causes of Human Behavior Excerpt with Manly Palmer Hall Part I appeared first on .