Hi there, my name is Steve Stein, I’m the founder of Better Listen, the host of the Surfing the Tsunami of Change Summit series and most recently, WisdomFeed+, a new membership that we’re building, a community to support people in these uncertain times.

The reason why I’m here tonight is to talk about a dear friend who recently passed away. Robert Bly won the National Book Award for poetry, Harvard trained. The first time I recorded him was in the 80’s when he spoke at the New York Open Center at the Beautiful Friends School in the East Village. Amazing day. He gave a day long workshop about his book called A Little Book on the Human Shadow. 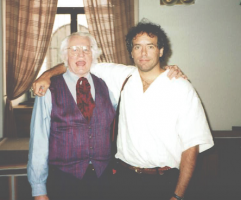 I want to paraphrase the story. In the story he talks about that when a kid is born, he’s 360° of radiant light. Then his mother sees him going close to the stove, “watch your hand.” Then he goes to kindergarten and they say “stand straight, don’t talk.” And by the time he’s in third or fourth grade, you know, the 360 degrees is down to 270 but where does that light go? That light goes, he talks about, in a bag.

So you take you take that light and you throw it in the bag.
By the time you’re 20 years old with so many rules and regulations in life, you’re down to maybe 20 or 30% light and all that light is in the bag and the bag is 200 pounds and 500 miles long.

I left this part out of the video. Then Bly goes on to say you spend the first half of your live filling up the back and second half of your life emptying the bag.”

That’s the metaphor he uses for the human shadow. And it’s a dark subject, but I love the way he just breaks it down into street smart, normal everyday wisdom.

So I’m just gonna give you a little tour. This is one of the first cassettes we released. Earlier incarnation of my company was Sound Horizons. Yes, that’s cassettes, if people don’t know what that is.

And we sold a bunch of these, just great to get this kind of message out.Moving forward. Then after a few years  Robert starting mentioning  a best selling author, Deborah Tannen. 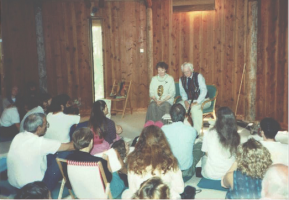 So I called Ralph White at the Open Center and I said, Ralph, we should get them to speak together. And, back and forth, back and forth, it happened, and it was an amazing event at where is it? At the hall where Abraham Lincoln gave his address downtown in Cooper Union. Amazing event, a little bit challenging to produce a video. But we produced a video. It was on PBS with the support of the Open Center and Robert Bly and Deborah Tannen. And here’s the video we did, we need to digitize it and get it out again, the audio version of that won a Starred Review in Publisher’s Weekly. We’re going to give away the audio of this for free just in tribute to Robert. (See  the link at the top of the page) 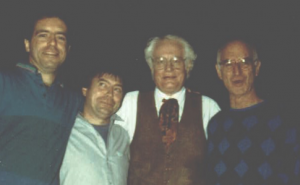 And then for years after that I recorded all of the men’s conferences, the east side of the country, Rick S and another Rich – they recorded the ones, most of the ones on the west coast. But it was incredible. You know, Murphy Brown. The tv show made fun of the men banging on drums in the woods. But it was real and you know, I remember recording sessions where there were 4, 5, 6, 700 people in the room. Only men. You know, and there was no ill will towards women, men, anyone. But it was just remarkable when only men were present,  how things, comments and feelings surface and open up. He was a poet and he’s a wonderful poet.

Here’s an audiobook that we’ll be giving away , The Educated Heart. There are 3 titles we are giving away with Robert and you can get them here.

I was an Evergreen poet, I went to Evergreen State College and I did no poetry after school. I went back into the real world, got a job recording conferences and I stopped poetry and stopped my soul work. I didn’t realize I was doing soul work. I was just writing poetry.

So recording all those men’s conferences was soul work and re-introduced me to poetry, to moving, relevant poetry. And I’m not gonna bore you with a poem, but I will share this one thing with you.

So I had the great good fortune to record a lot of those men’s conferences with Robert Bly James Hillman. If it wasn’t for James, I would not have met my wife and had my beautiful teenage boys so shout out to James and Robert and Michael Meade. The three of them were just doing some phenomenal work, and other people, John Lee who I thankfully still worked with.

I had done, I think it was a workshop somewhere in the midwest with Michael and James and then we flew together and they did something together with Robert Bly. But I had a copy of the book signed by both of them in the first stop of the recording and then the first place we recorded the workshop. And then when we got off, I had a copy of the book and I had Robert sign a copy.

So, let’s see, Michael Meade- “May your ears hear the song your heart sings.”

To Steve, “Let’s go to more festivals for the ears.” -Robert Bly.

For Steve, “From mench to mench. In the South too.” From James Hillman. Hanover College, 1992. Whew, thanks for dating that.

And someone else from the Kansas City men’s workshop. Not sure who signed it. But there it is, I am always proud to have this, love the book. Great anthology of moving poetry.

Anyhoo that’s my trip down memory lane with Robert. He was a great friend, an amazing gift, an amazing giver and sharer of soul. And I hope to meet him again for festivals of the ear at sometime in the future. Rest in peace, Robert, peace.