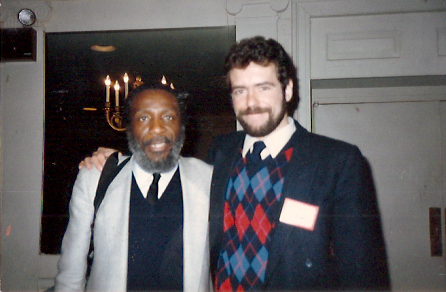 In the early ’80s, there was an event that in many ways expanded the human potential movement, it was created by a west coast entrepreneur, Alan G, the first event was held in New York City. It was the Whole Live Expo.

Right out of college I found myself cold-calling organizers of upcoming conferences on the New York City Convention Bureau List -one listing caught my eye.  It was a listing for a conference that was coming to the Javitz Center and the number of expected visitors on this listing was something like 25 to 30,000 people. The listing was “The Whole Life Expo.” A conference of that size was in dramatic contrast to the more mundane groups listed, American Society For Chemical Engineering, The New York Dental Academy, etc, this listing was something special.

After a series of conversations with the organizer, we got the gig to record and sell tapes at the first 10 or 15 Whole Life Expo’s, initially in NYC and then in Boston, Los Angeles, and San Francisco, at the Moscone Center. There must have been 15 to 20,000 people at the first few Expos, it was a diverse crowd, many important figures of the day were presenting, Anne-Marie Colbin, Armand DiMele, Victoris Kulvinskas, Leslie Kasloff, Gary Null, Abbie Hoffman and more. There were amazing performers as well, one that stands out was Richie Havens, who performed at many of the earliest expos. – The Grand Finale was almost always toured de force presentation with Dick Gregory

There were hundreds of booths to explore. From new age music to The Omega Institute and The NY Open Center. There were the fringe booths about UFO’s and you could actually purchase a pyramid-shaped hat and get a polaroid picture of your chakras.  There was also the nutritional aspect. Dick Gregory was promoting his “Bahamian Diet,” a delicious and nutritious wellness powder you would mix with juice. The food booths were incredible, with an enormous selection of vegetarian and delicious foods from many cultures.

It was a big deal recording this, personally. I was aligned 100% with almost everything at the Expo. It also had an enormous impact on my team doing the production. Along with and in spite of the pyramid power and the conspiracy theorists, the groundswell of excitement was palpable, it captured and created the zeitgeist of what the nation and people were hungry for – spiritual nourishment, actual nourishment, empowerment, and hope. To see hardcore New Yorkers walk off the street in their suit, and walk out an hour or two later, relaxed, transformed and introduced to a new way of looking at and living life, was profound.

There were hundreds of speakers over the course of three or four days. One highlight of the weekend was Saturday night performances, oftentimes pioneering sound healing musician Steven Halpern would give an amazing performance. The Saturday concert featured some great musicians, a number of times the headliner was Richie Havens. 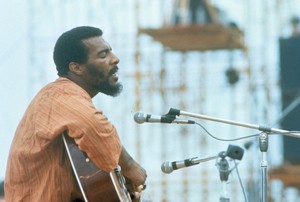 In one instance the inexpensive mic stand they were using for Richie Havens fell apart when someone in the packed room tripped on a cable.  With the mic on the floor and a packed room, I had to act. So, when in doubt, use duct tape. I literally grabbed a broom and taped the broom to a chair and taped the microphone to the broom. It worked, people in the room could hear and we got the recording! Richie was so gracious, he made light of the glitch and seconds later he was singing his iconic tunes that transformed the event to something larger than life.“Freedom, Freedom…”, “Sometimes I feel like a motherless child,” the show was riveting, the crowd was just so alive.

At 3 or 4 o’clock on Sunday, the last day of the event, one of the most entertaining and evocative speakers I’ve ever worked with was the amazing Dick Gregory. He spoke to you and through you, directly into the core of your being. His raw humor would open your heart and mind and then an abundance of wisdom and insight would just flow into your being. He got your defenses down with humor and then he would educate and motivate the crowd.

One friend that was working with me recording the Expos was an old friend Ted D. I called Ted last week to remember those amazing events and to see what he remembered about recording Dick Gregory. Here is one of the stories he shared with me. I will paraphrase the story he remembers Dick Gregory telling-

“I told one of my friends that I was becoming a vegetarian. My friend was like, ‘What?’, a vegetarian, that is dangerous, you should see a doctor before you do something crazy like that!”
“How come no one ever told me to see a doctor when I was smoking 2 packs of cigarettes, drinking a 5th of whiskey every day, and spent $300 a week on that poison. How come you didn’t tell me to see a doctor then?”

Ted D. has been a vegetarian since hearing Dick Gregory speak all those years ago.

One of the concepts I remember Dick Gregory talking about in those lectures, resonates with me to this day. Again, I paraphrase.

“My family grew up eating fried chicken, all kinds of pork, and a ton of sweets” (Dick Gregory had hilarious examples of those unhealthy foods)
“It’s no wonder that diabetes runs in my family. You need to understand though that diabetes doesn’t run in the family, the diet runs in the family.”

Hearing a statement like that permeated my being, made me think, rethink, re-imagine and re-examine the way I lived my life.

Yes, the diet does run in the family. Through the laughter, Dick Gregory and the other speakers were introducing everyone to the concept of holistic living, holistic thinking and the importance of healthy thoughts and nutrition. Dick would get you laughing so hard you would forget that he was friends with Martin Luther King Jr and was a prominent civil right and nutritional activist.

Also, after Brother Dick spoke, we sold a boatload of tapes. We made high-speed copies of his recordings and attendees could take home the recordings from the event. There would be 5 or 10 people deep in line for purchasing tapes for hours after Dick Gregory spoke – we all made a few dollars. It was an honor to disseminate this wonderful message.

At the end of the day, when we divvied up the money, Dick Gregory would call me Brother Stein.  I would go up to his suite in the hotel with a bunch of cash, a tally sheet while all of his friends and bodyguards would keep an eagle eye on the proceedings.