Indigenous Peoples’ Message To The World 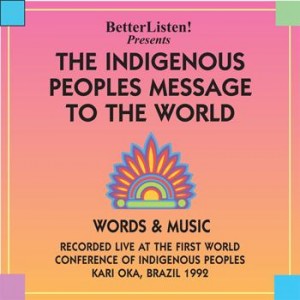 BetterListen! was called in to document on audio, the lectures and cultural music presentations at The First World Conference of Indigenous Peoples in 1992. The result is this award winning program produced by David Ison, endorsed by The United Nations, Starred Review in Publisher’s Weekly and now available for the first time in digital format.

“This is our chance to listen to a message from people closely connected to the Earth. The industrial world has put their very existence at stake. Stop and listen to their world!” – Mickey Hart (Author of Drumming at the Edge of Magic and Planet Drum, drummer with the Grateful Dead.)
“This authentic product is a “Who’s who of ritual tribal music and ceremony” – Publishers Weekly.

“It’s about time these little-known and so often misrepresented people get the opportunity to speak for themselves (this is not Dan Rather speaking folks)… The music on the second half is fantastic.” – Wilson Library Bulletin
Available for the first time in recorded digital format, the award-winning Indigenous Peoples’ Message To The World delivers a timeless and more relevant than ever message to us all, and represents a collaboration of numerous organizations, individuals and indigenous peoples from around the globe. Recorded live in the Amazon Jungle in Brazil in 1992 at the First World Conference of Indigenous People’s. The extraordinary partnership captured here was spearheaded by Marcos Terena, the founder of the United Indigenous Nations, and supported by the Tribal Link Foundation and Land is Life.

Marcos Terena, founder of the United Indigenous Nations, coordinated the World Conference of the Indigenous People on Territory, Environment and Development, and is a frequent speaker on indigenous rights. The Tribal Link Foundation is a communications network linking indigenous peoples to information, media, resources and relevant networks, with a special focus on the United Nations system. Land is Life is a unique and effective indigenous-led organization that is at the forefront of the international struggle to promote and protect the rights of indigenous peoples.
You can get the title here for free for a limited time only.

For more information and to support the cause of Indigenous Peoples visit TribalLink.

The post Indigenous Peoples’ Message To The World appeared first on .