How will you introduce yourself to God? Dr Bernie Siegel 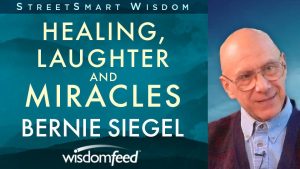 “One of my workshop questions is, “How will you introduce yourself to God?” Because there’s a waiting line there, when you get to that line they say that. And the answer that gets you in is basically,” I don’t need an introduction, I’m his child,” you know, to feel that you’re part of the divine. And i really feel that the reason we’re alive is to make God happy.

You know, that if we can participate in creation, be God with skin on, you know, you need tools, so we can be the tools and to do that. And I say, “That’s who I am,” the other part is, that I accept the fact that I’m continually growing and changing, and one of the things that I learned is most significant. Because one day I said to a nurse at the hospital, “What am I, the worst doctor in the hospital?” She said, “What are you talking about?”

I said, “All you’re ever doing is telling me how to do things better.” And one patient said to me, “I’m giving everyone a bottle of liquor but not you, everybody who took care of me.” I said, “Why not?” He said, “Because you’re always angry.” I said, “I don’t like what happened to you. I don’t like what I do to you. I’m sorry.” He said, “All right. Here is a bottle of liquor.”
But what the nurse said, you see, and what the patient was telling me is, “We know you care. We’re trying to improve you.” And that’s what the nurse said to me. She said, “Look, the doctors who make excuses, we don’t talk to. But you listen and you try to change.” And so I always say, if you want, whether it’s a plumber or a doctor, say to them, “If you want somebody of quality, are you criticized by patients, family, and nurses?”

And if the answer is yes, then you say, “Okay, I’m hiring you. Because then I cannot blame your pipes or your roof, you see, for being a problem.” And so, I know doctors who blame their patients, you know, “You’re the only one who complains, you’re the only one who…” But they could learn and so I learn from my patients, and there’s an old saying, ‘Criticism polishes your mirror.‘ Because in the old days, mirrors were metal, reflecting, and so you kept them polished. And what I find is an overall theme for everyone. It’s in all literature, ‘The quiet mind, the still pond.’ That’s when you see the truth.

And so, again, when others are being coaches for you, in other words, the nurse, the family, they don’t come up to you and say, “You’re a mess, you’re not doing anything right, you’re a problem, you embarrass me.” That doesn’t help, but the family, or what the nurses are telling you, there’s a better way of doing it. And I always say if you have someone coaching you, come up with a key word. I used to have a pin called, just the word ‘attitude’ that I would give to patients. And one woman used that, she said, “My husband isn’t doing what’s good for himself, I go over, i hold this pin and say, “Honey, that is straighten out your attitude.” See, the kids used to say to me, “You’re not in the operating room now, dad.” Because when I was becoming over bearing, they would just remind me that this is your family, you are not in the operating room. And, you know, they weren’t saying, “You are a terrible father,” they were just putting me in a different place where I stopped and listened and know. and I would also add that anger can be appropriate too, if you are not treated with respect. But constantly parading others of being angry at others, doesn’t accomplish anything.

One woman’s quote is…”My mother’s words were eating away at me and maybe gave me cancer. She dressed me with dark clothes, and nobody would notice me, and told me I embarrassed her, I was a failure.” Now, she transformed her life and she got cancer fortunately and survived. But when you grow up and I mean this literally, the biggest problem on the planet is, how children are raised. If you grow up with love and a reverence for life, you wouldn’t be reading all these headlines. But I think with rejection comes with desire for revenge, with revenge, guilt. And there is a story of mankind. So you’re reading all these headlines about mass murders, and abuse, and even people running various countries, you know. If they were brought up with love, we wouldn’t have a problem interacting with them. But when they are busy trying to show you how wonderful they are, you know, and that you are the problem, then it doesn’t work.

And I just wish we could, have that happen, you know, train people to be parents when their child is born. Have them in classes, so they know what to do. And, again, I was trained by my parents and grandparents. I grew up with love. And these models, I would share with everybody. “Ma, I’ve got to make some decisions, what should I do?“, “Do what will make you happy.”, “Ma, I need help. What shall I do?”, “Do what will make you happy.” That was it. And I come home every bad day, “Ma, everything went wrong at school today. I don’t know…” “God is redirecting you. Something good will come to this.” And I always remember Norman Vincent Phil saying, oh his mother said, “Norman, If God slams one door further down the corridor, another will be opened. And so, again, I didn’t appreciate what my parents were telling me but I knew they loved me and they kept me with an open mind. And last was that, material things are not to be accumulated to impress everybody. They were to be used to make the world a better place.

And I was on the phone the other day, you know, like you enter a contest, and I got this number to call and the guy takes your information and at the end he said, “And if you win, you know, a million dollars what would you do with it?” I said, “I’ll make the lives of other people easier and better.” And he went dead silent. He was stunned. “Nobody had ever said that,” he said to me. That kind of a poll like that, no one would say, “I wanna make it a better world.” And literally 95% of lottery winners, after five years, say it’s one of the worst things that happened to them. Because they get so screwed up, you know, with the money and family and everything else. But to me, it’s trying to help people. Yeah, I need to pay my bills but still, if I can do something for someone else, I’d like to help them. If you don’t mind these stories, I was just stopped and shopped the other day and a woman came up and said, “Can you help me?” I said, “What?” She said, “I have food stamps but they are only for food and I need some other things.” I said, “What do you need?” She said,”20 dollars.” I said, “I’ll give you 20 dollars and go buy them,” you know. “Or I’ll get you the food stamps and you,” you know what I mean, with my…but, I would feel good going home helping her. Rather than, “I’m sorry I can’t do anything.” No. I’ll try to work it out and help her.
Check out more audio and online programs from Bernie – Here.

The post How will you introduce yourself to God? Dr Bernie Siegel appeared first on .