Having Archaic and Eating it Too with Terence McKenna Part II 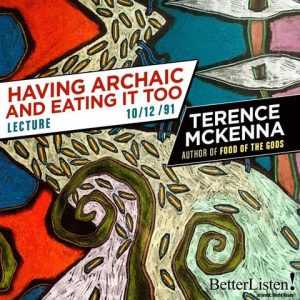 We are pleased to bring you another lecture from Terence McKenna – Having Archaic and Eating it Too.  In this lecture, he weaves a galactic tapestry of art-tickled articulations of the history and future of psychedelic alchemy, the government/ culture clash, and the surging general ordering of chaos from UFO’s to archaic shamanism.
At some time in the past, the African continent as you all know, was not the largely decertified and serefitic area that we confront today. It was in fact a region covered by climaxed tropical rain forests and in those rain forests, living in our boreal existence, were our remote primate ancestors and they had developed a complex repertoire of pack signaling in order to warn of approaching danger and the presence of foodstuffs and this sort of thing.
And they had fully occupied their niche and were at evolutionary climax. Were it not for the fact that the African continent began to undergo a period of drying and desertification, mind might not have ever emerged on this planet, in my opinion.  There was a unique confluence of advance that created a minded species and I’m interested in converting you to this point of view because as you will see, as I get into it, if you were to adopt the point of view I’m putting out, it would change radically how we think about ourselves, how we thing about our relationship to nature and most importantly how we think about substance use and abuse which is something, you know, tearing society apart as we approach the millennium.
Read more about the author
Free audio preview

The post Having Archaic and Eating it Too with Terence McKenna Part II appeared first on .