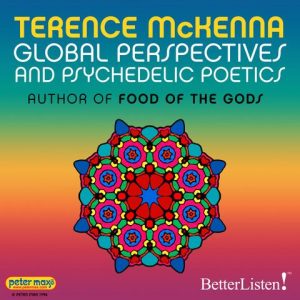 We are pleased to bring you part two of Global Perspectives and Psychedelic Poetics with Terence McKenna part two.  McKenna calls for an “archaic revival” and a dissolution of the fictitious and synthetic boundaries erected by the historical male ego. He believes this dissolution to be enhanced by the ingestion of natural psychedelics.
I don’t think we have to go back as far as the worm like stage. I think what we have to do is, we have to get out of history. History is a con game run by frightened men and their obedient studges.
We had a moment of happiness. There was a moment of completition. I guess I should explain my position on this. You see, there have always been dominance hierarchies in primates. As far back as you go. Clear back to squirrel monkeys. There are what are called male dominance hierarchies. So then, in us, this was interrupted by psilocybin use over a period of probably a couple of hundred thousand years. The psilocybin, forget that it’s psychedelic for a moment, just think of it as an inoculation against ego and so for two hundred thousand years or so it was a delitry item which surpressed this normal monkey behavior.
Learn more about the Author
Click to to listen to audio of title