Fighting For Science in the World of Alternative Facts

Truth Speaks Out at the March for Science

Much like the Women’s March that followed the 2016 presidential election, the most recent March for Science on Earth Day 2017 roused support in many cities across the nation. While scientists have usually found it prudent to stay out of the often contentious realm of politics, those days are coming to an end. In the past, there had been a fear amongst the scientific community that appearing biased would jeopardize their funding and potential for publication. However, it is becoming evident that something will have to be done to change the current swell of defunding that threatens scientific discovery and progress. Organized in Washington D.C. on Earth Day, it seems obvious that a large portion of the messaging was aimed at climate change deniers. Scientists were coming out against the continual borage of deliberate misinformation relating to the environmental effects of modern human life on our atmosphere and planet at large. But I wonder if any of those “doubters” even heard the message?

On April 19th, 2017, Neil deGrasse Tyson offered a video to the world of Facebook and claimed that these may be the most important words he has ever spoken. Tyson proceeds to challenge the science deniers by saying that “when you have people who don’t know much about science, standing in denial of it, and rising to power, that is a recipe for the complete dismantling of our informed democracy.”
Obviously, he is identifying the host of politicians and corporate representatives that engage in deliberate misinformation campaigns against the public in order to maintain their status quo. Instead of attacking these political mouthpieces, Tyson uses historical contextualization to illustrates that the industrial revolution and scientific advances have undoubtedly contributed to the rise of American power and prosperity. He also seems to fault a widespread lack of scientific literacy for the rise of the prevalence of this disinformation. While scientists undoubtedly applaud this analysis, is your everyday American convinced? Are there maybe somethings which people won’t believe, regardless of the facts, simply because they don’t want to?

The Effect of Belief Perseverance

An article in Scientific American dated 2012 addressed the issue of alternative facts long before that vernacular was so commonplace that it could be heard on almost every news program across the nation on a nearly daily basis. The article entitled “Diss Information: Is There a Way to Stop Popular Falsehoods from Morphing into “Facts”?” stipulated that “[Y]ou have to be careful when you correct misinformation that you don’t inadvertently strengthen it. If the issues go to the heart of people’s deeply held world views, they become more entrenched in their opinions if you try to update their thinking,” according to Stephan Lewandowsky, a psychologist at the University of Western Australia in Perth cited in the article. Later the article explains that “psychologists call this reaction belief perseverance: maintaining your original opinions in the face of overwhelming data that contradicts your beliefs.” So what do we do?  Now that we do live in this era when facts can so easily be disputed, is trying to prove what is true really going to be effective enough in manifesting the change we want to see in the world and convincing enough for those whose simply have decided they cannot be convinced no matter what? 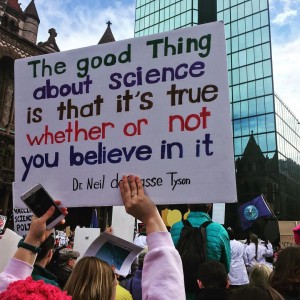 Another challenge is that messaging about science can be complicated and dense. Which is why March for Science was so great. It was within the context of protest and signage that scientists had to begin to think of clever slogans and images to communicate their ideas instead of relying on long drawn out explanations most people simply don’t have the time for anymore. For the scientific community, which is used to endless citations and peer reviews, this is a completely different methodology and one that might serve them well to explore further. Take for example the signs featured on Slate that included “Ice Has No Agenda. It Just Melts” and “I Can’t Believe I Am Marching For Facts.” Science is complicated and doesn’t often distill easily to one-liners, yet there they were, a collection of messages worthy of at least some real branding potential. It is truly unfortunate that we have created a culture where the most important part of your message is the hashtag, but nonetheless, here we are… standing at the threshold of 140 characters or less, trying to make sure the future of the planet isn’t sacrificed because of poor marketing. Just as Tyson writes about how to “reclaim America’s greatness”, as a way to subvert and re-brand the overused presidential slogan, we too need to subvert and repossess the current cultural paradigm. If only every tree cut down considered the economic loss of oxygen or oil spills and tainted water supplies were not just measured in terms of the expense of their cleanup efforts, but in terms of clean water lost, healthy children lost, and an effective workforce lost… then maybe these corporations and politicians would image the need for some real change. As long as their bottom line does not have to calculate in these factors, we are primed to maintain a status quo that exhausts our natural resources and pollutes and endangers the health of the planet and every living being on it. In the meantime, maybe we have to begin to be savvier with our own messaging, considering techniques utilized by brand marketers, and flipping them on their head by engaging in culture jamming. This technique of subverted a brand messaging with a competing narrative that is placed alongside their brand or logo was popular in the 1990s. It served as one simple yet effective way to devalue a carefully guarded image or brand message.
The brand we are subverting here could be any politician, political party, or corporation that stands in denial of scientific facts. By engaging creatively, and with humor and sincerity, in this way, perhaps we too can help reclaim America’s greatness with a new message like “Health is Wealth” and “The Truth Shows the Way.”
Now if only we could combine those slogans with some tangible physical products to introduce into the consumerist marketplace, maybe we could really get our message out there.

The post Fighting For Science in the World of Alternative Facts appeared first on .