Exploring the Hermetic Tradition with Terence McKenna Part I 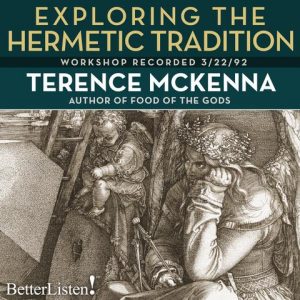 We are pleased to bring you another excerpt from Terence McKenna – Exploring the Hermetic Tradition part I.  In this lecture Terence McKenna explores the Hermetic Tradition by discussing ancient traditions, symbolism, the philosophy behind it.
In the Hermetic magical view human beings are not tainted by original sin and no ideology is without the potential of abuse. The Hermetic attitude in the renaissance was summed up in a single aphorism by the great renaissance Platonist Marcello Pachino and what he said was and I have to, you know…. There’s is no sexism in all of this. You just have to realize these guys were primitive types and they hadn’t confronted the political issues we’ve confronted. So when they say man, they mean humanity.
The renaissance magical attitude is summed up in Pachinos aphorism. Man is the measure of all things and this is a double edged sword because in a single affirmation, you cast off the guilt trip. You cast off the view of ourselves as a flawed creature, but when you say man is the measure of all things, I Mean you could be the chairman of the board of Louisiana Pacific or Dow Chemical. I mean this is approximately their attitude. In other words, it ain’t rain forests, it’s not the life of the earth. It’s none of that malarkey. We are to be the measure of all things.
Read more about the author
Free audio preview

The post Exploring the Hermetic Tradition with Terence McKenna Part I appeared first on .