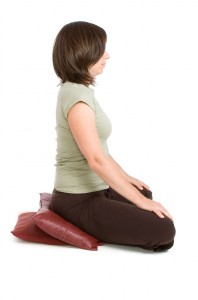 What’s the best posture to practice being mindful in? You might think it includes sitting with an upright spine either cross-legged on the floor or on a chair. It could be, that might be the best posture.
You might think it looks like a yoga pose, gaze fixed; long, slow breathing. That might be it.
Maybe being mindful is lying down doing a body scan, relaxing each part of the body while resting on the floor or a couch. That might be a good starting posture. Might not.
Similar to the joke, “How do you get a beach body? Take your body to a beach,” the same is true for practicing mindfulness. You practice mindfulness in the pose you’re in. If you’re walking, you keep your eyes open so you don’t bump into people on the sidewalk and you practice being mindful. If you’re cooking, you are standing and reaching and chopping and smelling and tasting and practicing being mindful. If you’re talking to your partner you may be sitting or lying or facing them as you practice being mindful. Depends.
That being said, the above postures are more advanced even though they may be the simplest or most natural.
Sometimes as beginners, we do begin seated in a way that we’re comfortable, but not so comfortable that we get drowsy. Sometimes we start with a strong form but eventually, and not even that long into the practice, we begin to notice we’re more mindful in any and maybe even all postures.
Practicing being mindful might include an intention, a set of directions, a seated form, a prayer or chant, for a certain length of time at a specific hour. But it really might begin with standing in the shower for a few minutes at the beginning of your day and noticing sensations and breathing. As you practice your formal mindfulness postures, you might notice all postures are an opportunity to be mindful and ultimately there are no postures that cannot be used to practice being mindful.
Jamine Ackert is a yoga teacher in Ottawa, Canada. @capitalyoga

The post Best Posture for Practicing Mindfulness appeared first on .